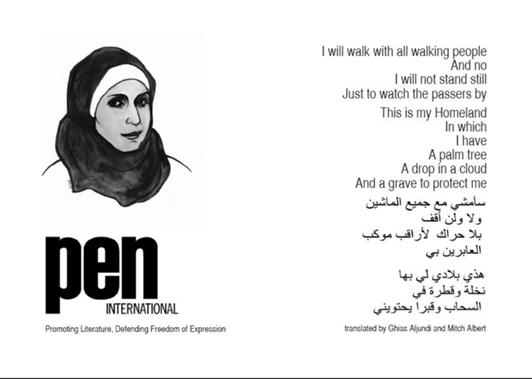 (WiPC PEN International/IFEX) - 23 August 2012 - PEN International continues to appeal to the Syrian authorities to stop the use of excessive force in the ongoing crackdown on anti-government protests. The crisis has now deepened and the numbers of victims on both sides of the conflict continue to escalate. PEN has designed a series of three postcards featuring portraits and the work of imprisoned and killed Syrian poets which you can send to Syrian representatives in your country. They can also be used in publicity events, as postcards or posters, to raise awareness and appealing for the end of the Syrian conflict.

More than 20,000 civilians have been killed, several thousands have been wounded and about two million have been displaced as a consequence of the conflict. PEN has been working on highlighting the cases of killed and imprisoned writers, poets, and journalists, by statements and through our RAN network.

With the purpose of honouring Syrian colleagues through their writings, PEN International has produced three postcards with brief extracts and a short background of the cases of:
•Blogger and poet Dia'a Al-Abdulla, arrested from his home in February 2012, who remains incommunicado
•Poet and blogger Tal Al-Mallouhi, jailed since September 2009, sentenced to five years in prison
•Poet and singer Ibrahim Qashoush, kidnapped and killed in July 2011

PEN International urges you to:

• Print: Please feel free to download the templates of the postcards from this link and to print them;

• Send: Send the postcards to the Syrian authorities via your nearest diplomatic representative of Syria;

• Campaign: Use these materials in any other way you can, whether by hosting events in solidarity with these writers and their families, approaching the media to raise your concerns about the Syrian crisis, reading sessions at literary events, etc.


Do you have a story to tell? Contact 'Let's Hear You!' and let us know! news@letshearyou.com
Posted by Mike Hitchen at 12:49