India - Bringing People Together, One Board Book At A Time 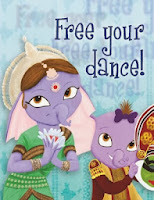 In the nation's capital, where an increasingly divisive environment has become the status quo, two women have embarked on a start-up venture to bring people and worlds together, starting with children and board books. Kyra Khanna and Malini Sekhar recently launched a crowd-funding campaign to support the production of their first board book on India that is part of a series that aims to address the dearth of multicultural content available to young children. Funds raised through the sale of Maya and Leela Present: Dances of India, which is currently available for order via their Indiegogo campaign site, will also go towards supporting two young social entrepreneurs in India.

According to a study conducted by the University of Wisconsin-Madison, between 1994 and 2012, only 10% of children's books contained multicultural content (Cooperative Children's Book Center, University of Wisconsin-Madison, http://blog.leeandlow.com/2013/06/17/why-hasnt-the-number-of-multicultural-books-increased-in-eighteen-years/). That percentage is likely to be far lower for the youngest readers (ages 0-4 years). At the same time, as working moms to toddlers, Khanna and Sekhar also recognized the power of children to constantly absorb and be open to new content.

"Through a lone board book I had found on the snacks and sweets of India, my toddler learned to say the words, 'Namaste' and 'India.' Not from my parents or myself who have roots in India, but from this book. That was a very powerful realization to me," remarked Sekhar. Khanna had a similar experience with her son as she searched far and wide for board books that provided some cultural context. With this in mind, the two friends, who met while playing for the Wellesley College tennis team, joined forces again nearly a decade later to fill what they believe is a critical gap.

Their primary goal is to grow cultural awareness in children's literature while concurrently bringing people (and worlds) together, starting with the leaders of tomorrow – children! "And, what better way to encourage playfulness and curiosity about the world than through books?", Khanna noted. "Our larger vision is really founded on that notion of perpetual youthfulness, in both children and adults". Sekhar's family is from India while Khanna's husband grew up in India, so they naturally decided to focus on India first. Ultimately, they hope to expand their Little Loka™ (loka meaning world in Sanskrit) Children's Book Series to other countries.

Given their backgrounds in international development, they also decided early on that embedding a philanthropic component was non-negotiable. Thus, they established 2Lokas, the company they formed to support their vision, as a business-social model that provides a pre-determined amount of funds to young social entrepreneurs in their target country. They will be distributing books to libraries and schools throughout communities in need in the United States as well.

You can learn more about their venture by visiting their Indiegogo campaign at http://igg.me/at/2lokas/x/4674301 or their website at http://www.2lokas.com.

Do you have a story to tell? Contact 'Let's Hear You!' and let us know! news@letshearyou.com
Posted by Mike Hitchen at 19:35