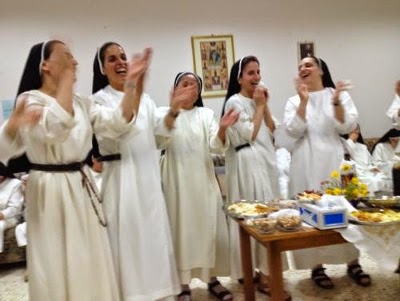 Facing imminent danger, the leader of the Dominican Sisters of St. Catherine of Sienna in Mosul, Iraq has called her sisters throughout Iraq to a time of intense prayer and retreat to beg God for the protection of the Iraqi people, especially the minority Christian community.


The Iraqi Christian community has steadily declined from approximately 1.3 million in 2003 to less than 300,000 today.  Recent statements from Christian leaders have indicated that it is unlikely there are any Christians remaining in Mosul today.

The Leadership Conference of Women Religious (LCWR) in the United States calls upon people of all denominations in the world community to join the Iraqi Sisters in a moment of prayer on Thursday, June 19 at 6 PM (in your time zone) to pray for an end to the violence and the protection of minority Christians in Iraq.

"We are living in extreme times. Christianity has been present in Iraq from biblical times, but at this point Christians are in grave danger and being forced out of this land or face martyrdom. The Dominican Sisters remain committed to accompanying their people regardless of the consequences," said LCWR president Sister Carol Zinn, SSJ.

The Iraqi Christian Sisters are all Iraqi nationals and ministers in healthcare, social services, and education.  In fact, the Iraqi Dominican sisters started the first Montessori school in the country. The Sisters serve all people, Christians and Muslims, in their ministry.

As the Dominican Sisters of St. Catherine continue their days of intense prayer, they ask that people throughout the world join them on June 19, believing that this intensification of global prayer can make a difference.

"We believe that prayer has the power to change the course of events in Iraq," Sister Carol noted. "We stand with our sisters and brothers who courageously remain with the people they serve and will join with them in prayer for as long and as often as it takes until the violence ceases."

About LCWR:The Leadership Conference of Women Religious (LCWR) is an association of the leaders of congregations of Catholic women religious in the United States. The conference has more than 1400 members, who represent more than 80 percent of the approximately 51,600 women religious in the United States. Founded in 1956, the conference assists its members to collaboratively carry out their service of leadership to further the mission of the Gospel in today's world.


Do you have a story to tell? Contact 'Let's Hear You!' and let us know! news@letshearyou.com
Posted by Mike Hitchen at 13:34